Depending on the composition, every type of stone requires a different type of craftsmanship. The skill of the craftsman is to understand the nature of the stone in front of him, to see the potential and support it, pulling the object or work out of the stone that contains it. A bit like Michelangelo, one of the great Renaissance artists.

The traditions of Bassa Bregaglia and Val d’Aosta involve working in soapstone, a ductile and malleable material still used to produce ancient objects such as laveggi, pots that have existed since 70 AD and furagn (containers with lids for food storage); but also other modern products for the home, from coffee services to stoves.

Tuscany was once famous for its Firenzuola stone (high Mugello) and the ability of master craftsmen to work in marble and alabaster as well.

Everyone knows Carrara marble, and the area of ​​Pietrasanta (Lucca) at the foot of the Alps, where today, from the famous sculpture studios, come unique pieces and limited editions of the most important sculptors in the world, making it a major centre for marble.

Another interesting area is Volterra, whose alabaster has been worked since the Etruscans. Today, with its honey colour, or orange-brown, it lends itself to decorative objects for lighting and sculptures.

It is like the rock of Lecce whose malleability makes it useful for creating fascinating works. Last but not least, there is the long tradition of marble and stone sculpture that lives on in Lazio. 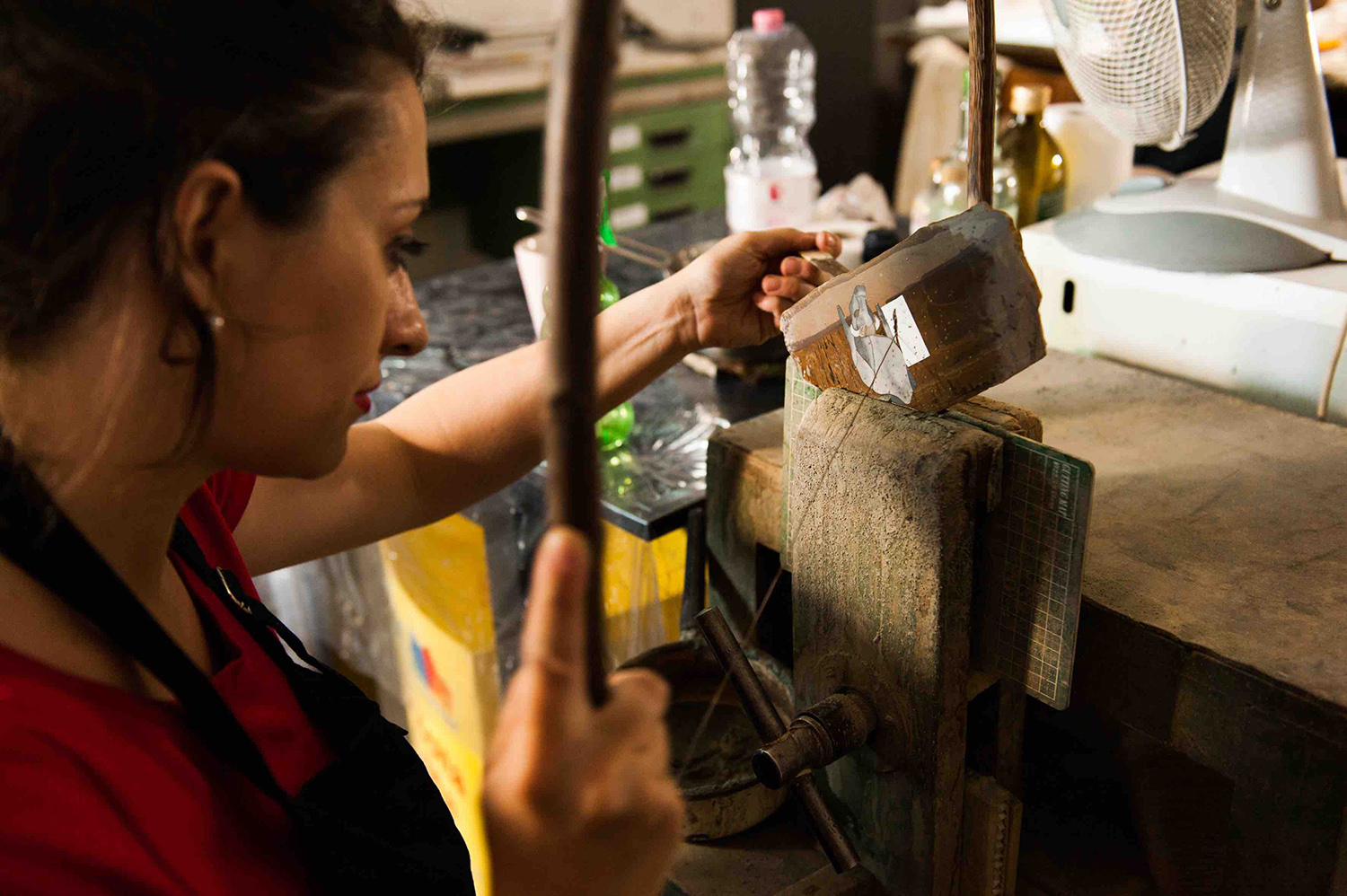 Graduated from the Academy of Fine Arts in Bologna in painting, Lituana di Sabatino later became particularly passionate about the art of mosaics and commesso fiorentino, training at the workshop of master Roberto Marrucci. In 2008 she opened the workshop La Nuova Musiva just outside Florence, followed in 2009 by the opening of the workshop-shop […] 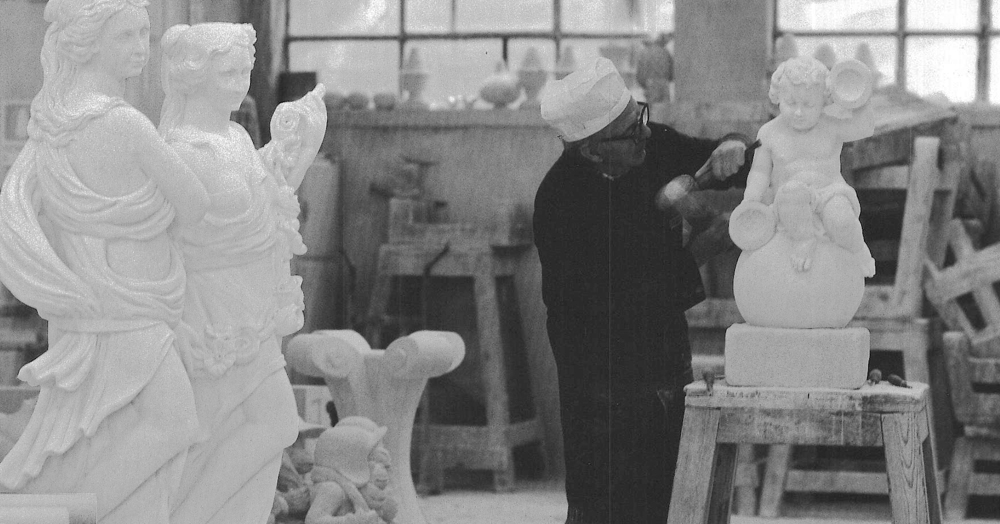 Started in the early 1900s, the Peotta Bruno workshop creates and exports across the world elegant hand-carved sculptures in Vicenza stone. The company is currently run by the fourth generation of a family of skilled sculptors and boasts a collection of over 2,500 items. Refined and innovative artifacts for both indoor and outdoor use. Tradition […] 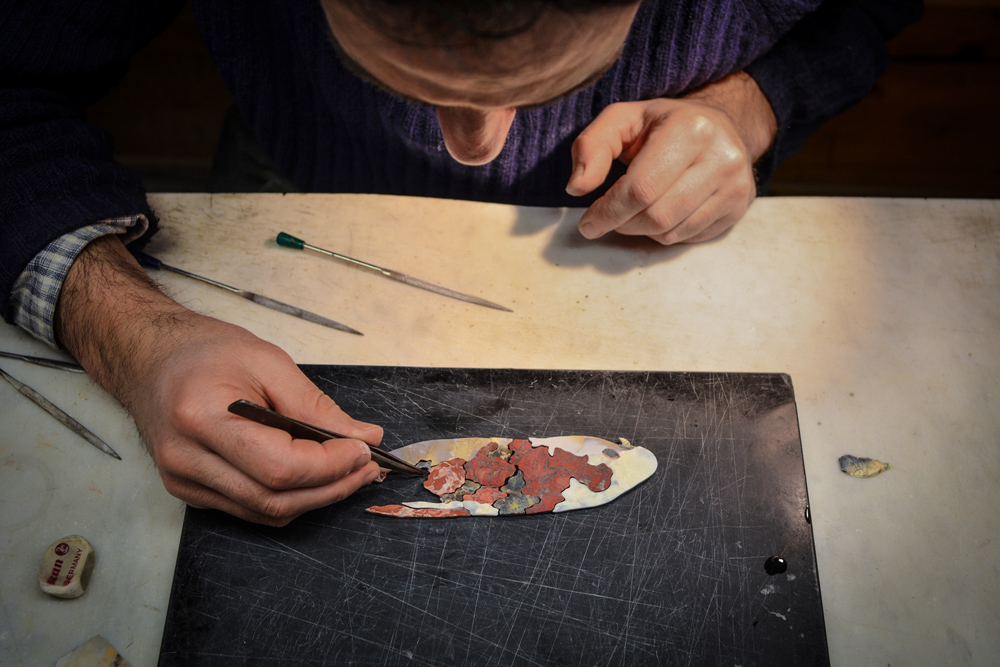 Pitti Mosaici was started by Ilio de Filippis who, after having trained at his father’s marble workshop in Venafro, near Isernia, opened his own place in Florence in the early eighties. Ilio is one of the few remaining artisans who still practices the age-old Florentine art of semi-precious stone mosaic-making. Over the years, many young […] 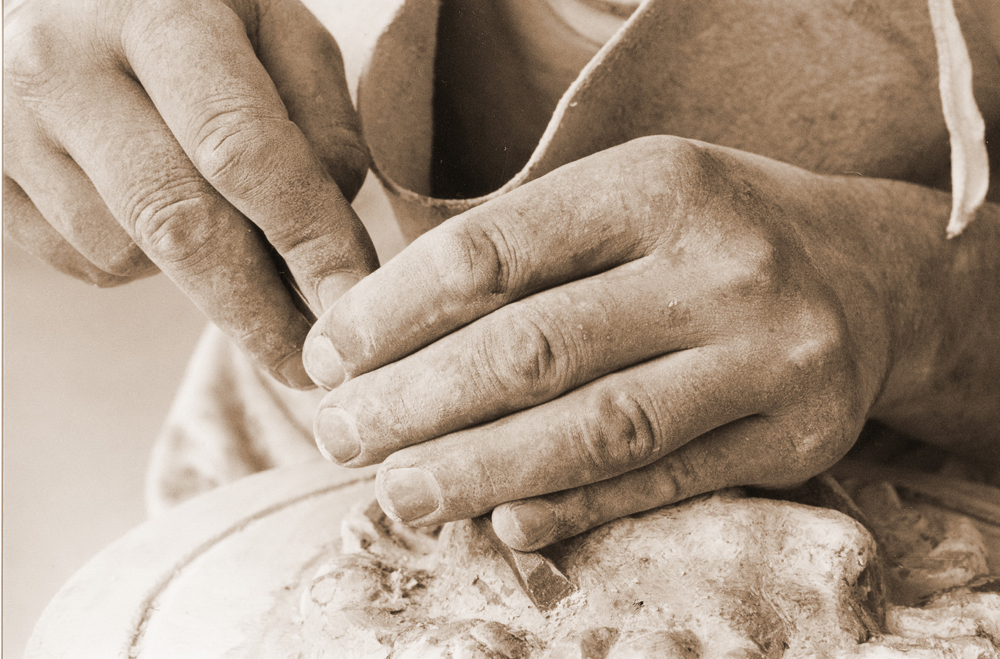 Arte 2000 is an artisan business which has been producing fine marble artifacts for 30 years. The artistic processing of this precious material requires experience, skill and passion, the key ingredients in any creative job. The company creates furnishing objects unique of their kind, exclusive items which are perfect to decorate both indoor and outdoor […] 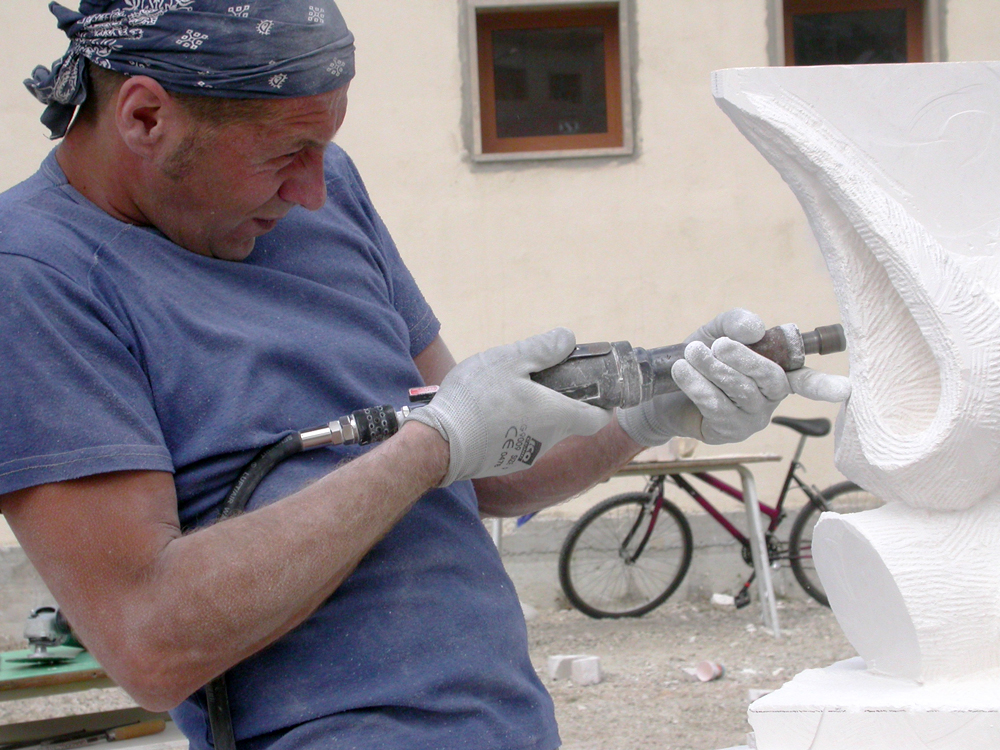 Alessandro Marzetti’s alabaster sculptures, which he calls Stone Drawings, are made by using age-old techniques and feature an elegant thread-like appearance, light and airy. A sort of sculptural handwriting in which strips of worked material draw shapes suspended in space and enclosed in thin cubic cages, which are not seen as oppressive structures, but as […] 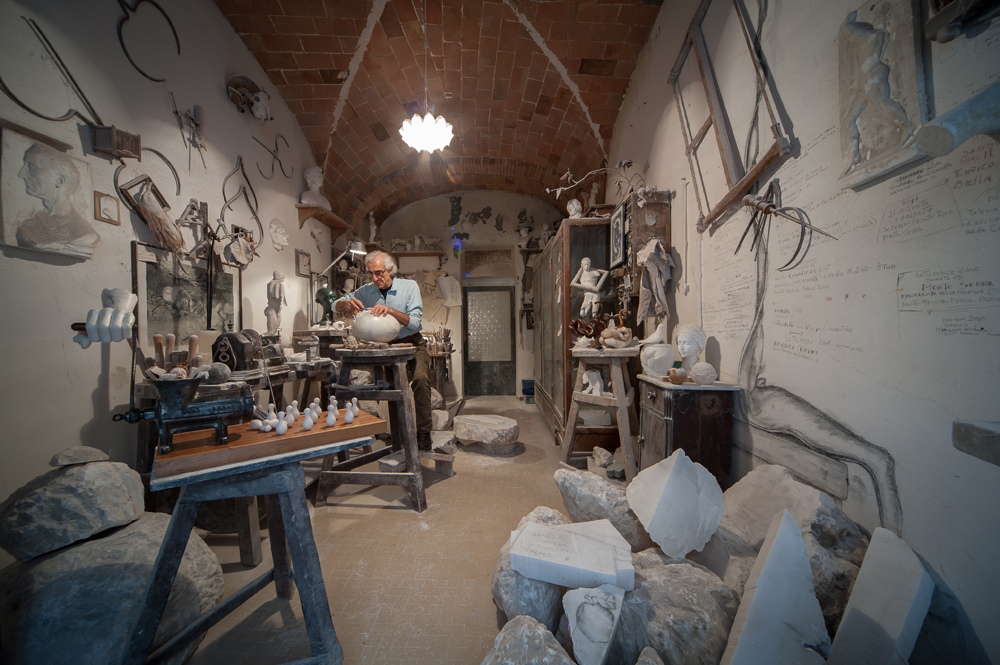 Located just steps away from Volterra’s Etruscan gate is the workshop of Paolo Sabatini, a true master of the art of alabaster carving. Anything can be a source of inspiration for his creations, from a simple scrawl to a beautiful bronze statuette from the Etruscan Museum. Paolo Sabatini makes use of pieces of wood and […] 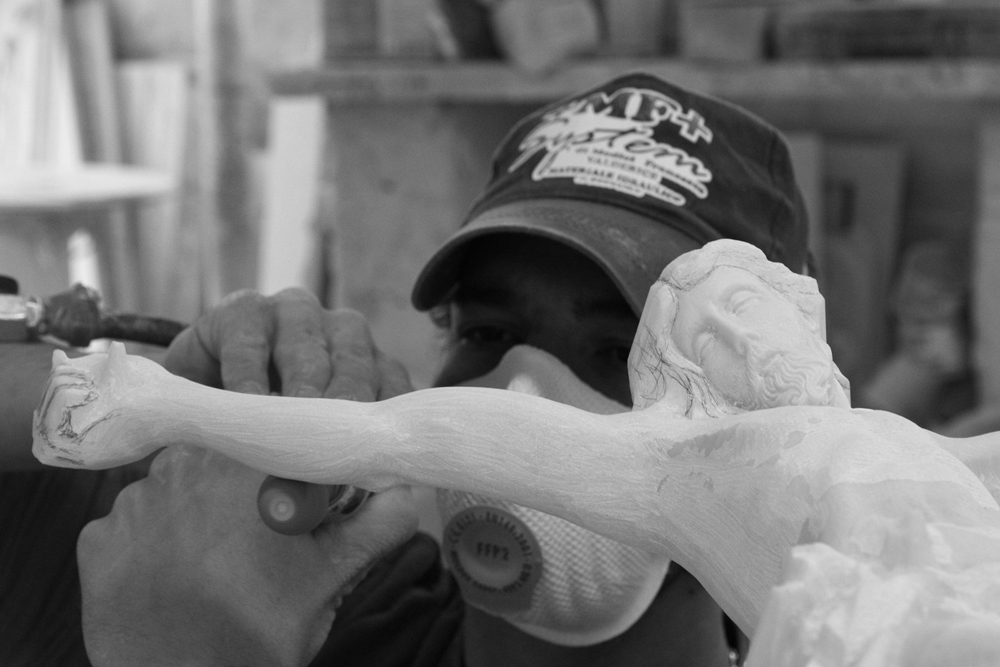 Cusenza Marmi is an artisan business that specializes in inlaid marble work, both high and low-relief. It was established in 1970, in the Erice area, in Western Sicily, which has been known for marble quarrying and processing for centuries. The works, which range from sculptures to furniture to sacred art, are inspired by the Sicilian […] 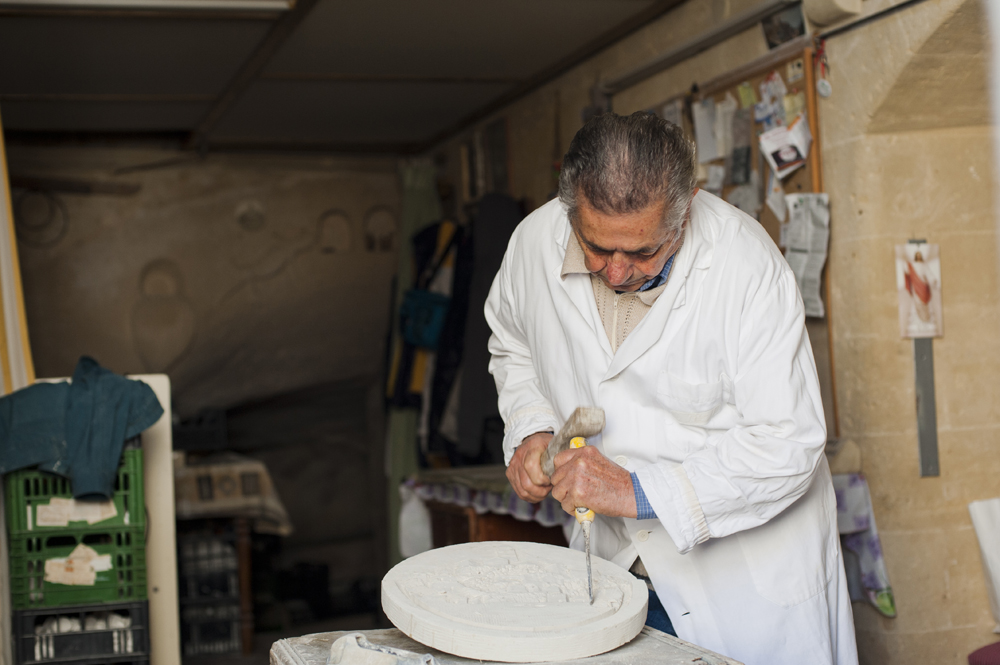 A scale model reproduction of the Matera Sassi quarter has been the main activity of this workshop located in the historic centre of Matera since the start of the 1990s. They are unique pieces that charm both the tourists and the residents: for the latter, they have become a traditional gift. The workshop also makes […] 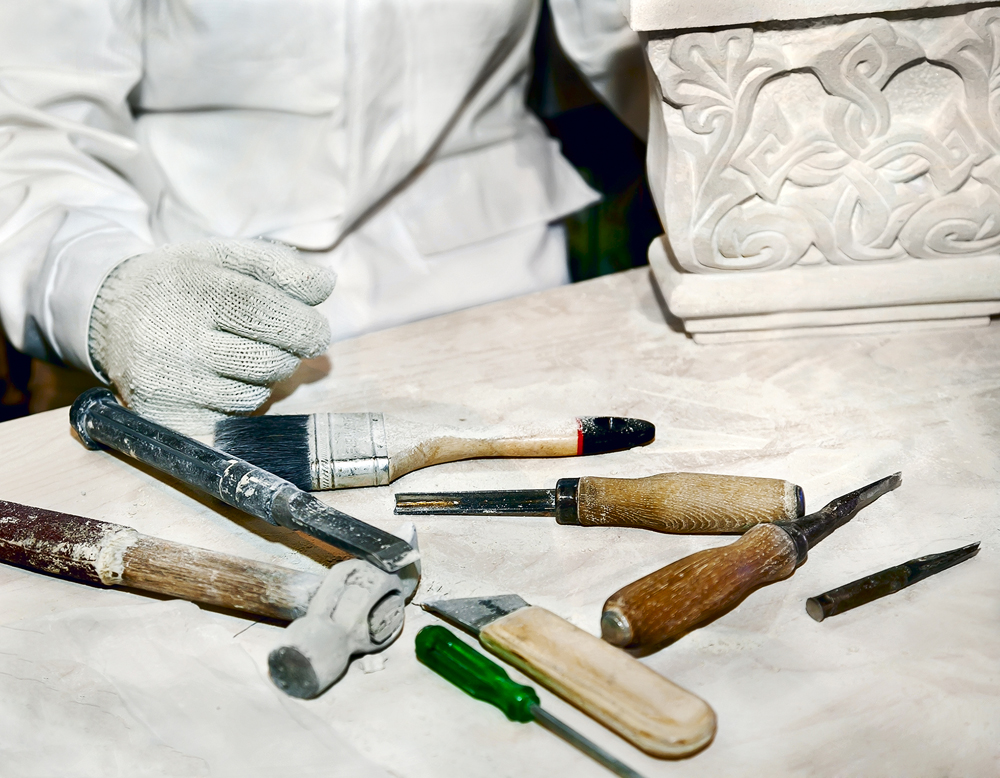 Statues of all sizes, nativity scenes from 11 to 160 cm: at the Casa d’Arte professor Lando Landi has been a supplier for the best religious shops in Italy and in the world and the religious institutions for more than 80 years. The smallest statues are made of solid resin, the others of fibre glass […] 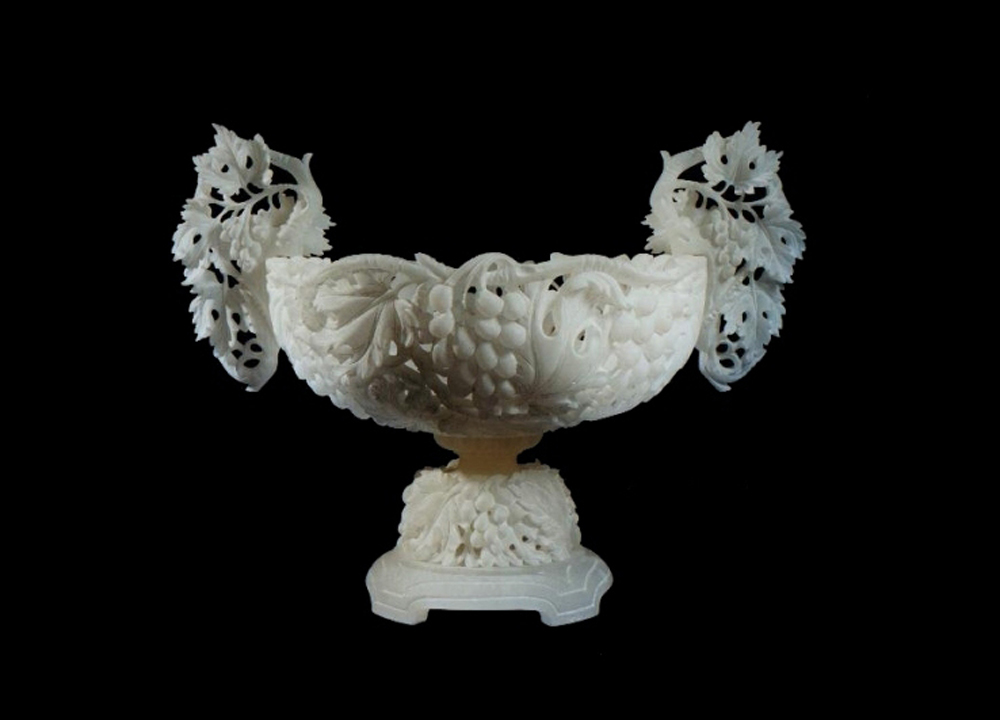 From the quarry to the customer: the objects made by Romano Bianchi and his son Roberto are 100% Volterra, given that the quarry is owned by the family. The firm was founded in 1959 by Romano Bianchi, a graduate and art teacher at the School of Art in Volterra. Today, the workshop specializes in making […] 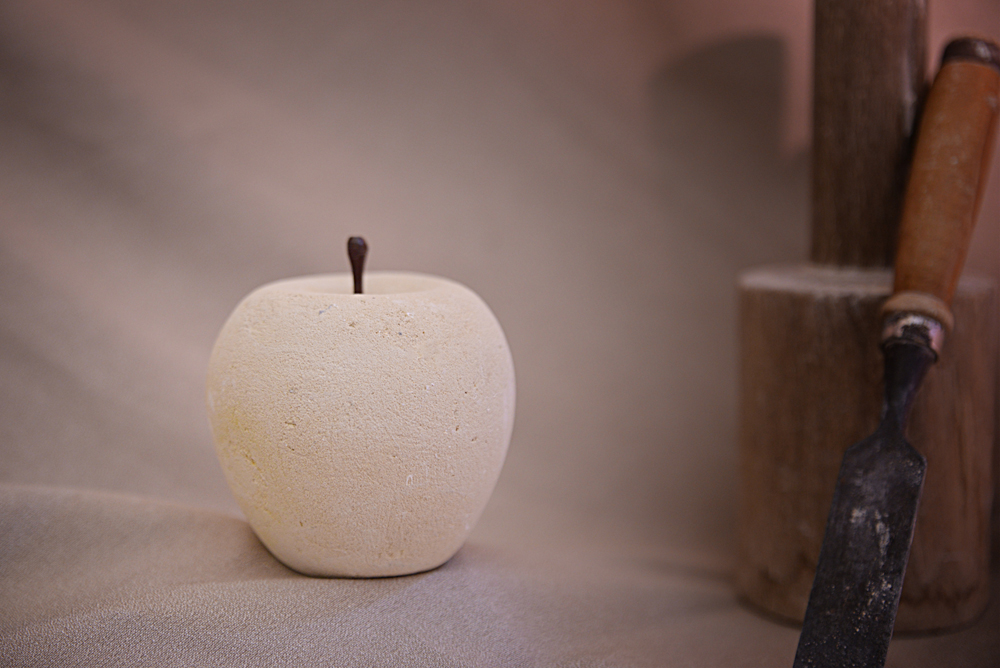 The ProgettoArte began about 15 years ago in a very picturesque location, a cave of the famous Sassi of Matera, specifically to restore this precious Heritage. Today ProgettoArte, while remaining active in this area, produces lighting fixtures, building products, furniture and ornaments made from tuff. Each product is made by hand by craftsmen, along with […] 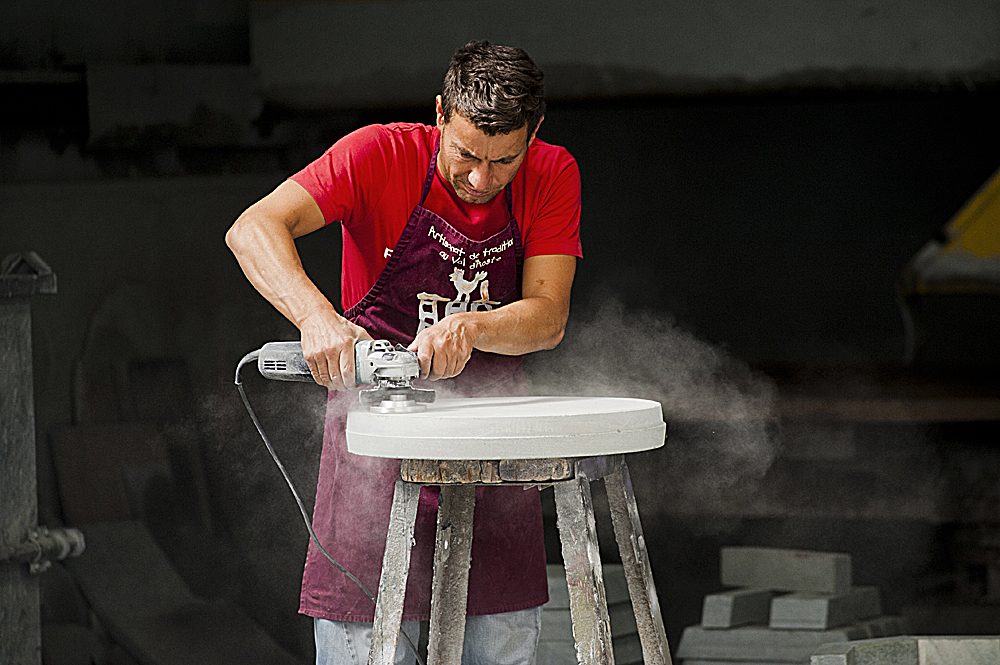 Soapstone is a ductile and malleable rock found in deposits above 1,300 meters. This grey-whitish colored rock is the ideal material for the construction of stone stoves. Fabrizio and Claudio carry on this tradition deeply rooted in the Val d’Aosta region and practiced since the 1700s, by using the processing techniques they learnt from their […] 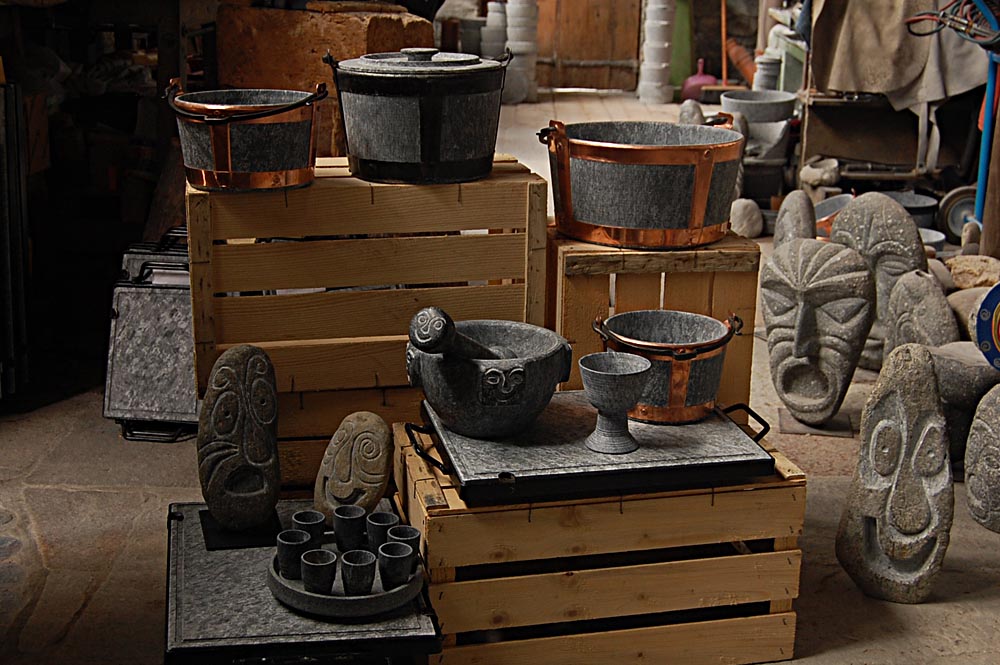 Of the old traditional activities in Bassaì Bregaglia, a prominent place is occupied by the crafting of soapstone. Roberto Lucchinetti has taken this ancient art and, in addition to laveggi, pots which have been in existence since 70 AD, he makes chalices, furagn (lidded containers used to store food), coffee services, vessels and ‘pigne’, stoves […] 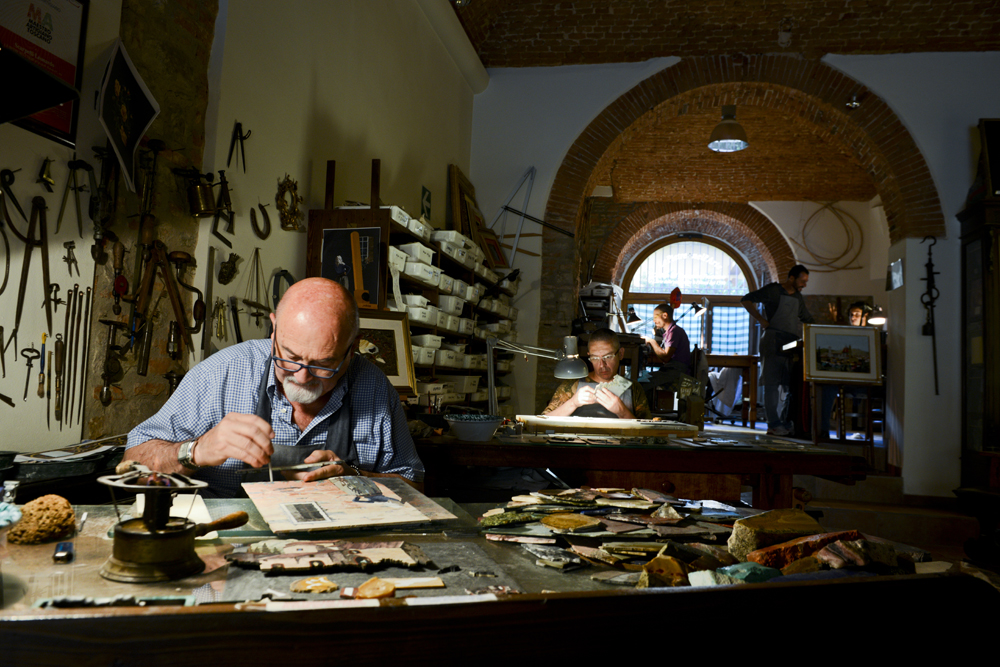 In the heart of Florence, thanks to Masters Renzo and Leonardo Scarpelli, the precious tradition of mosaic in semi-precious stone lives on, a tradition with roots in the Renaissance. To paint with stones requires great skill in finding the right elements and their colour tone, technical skill in cutting, filing and in pasting. All these […] 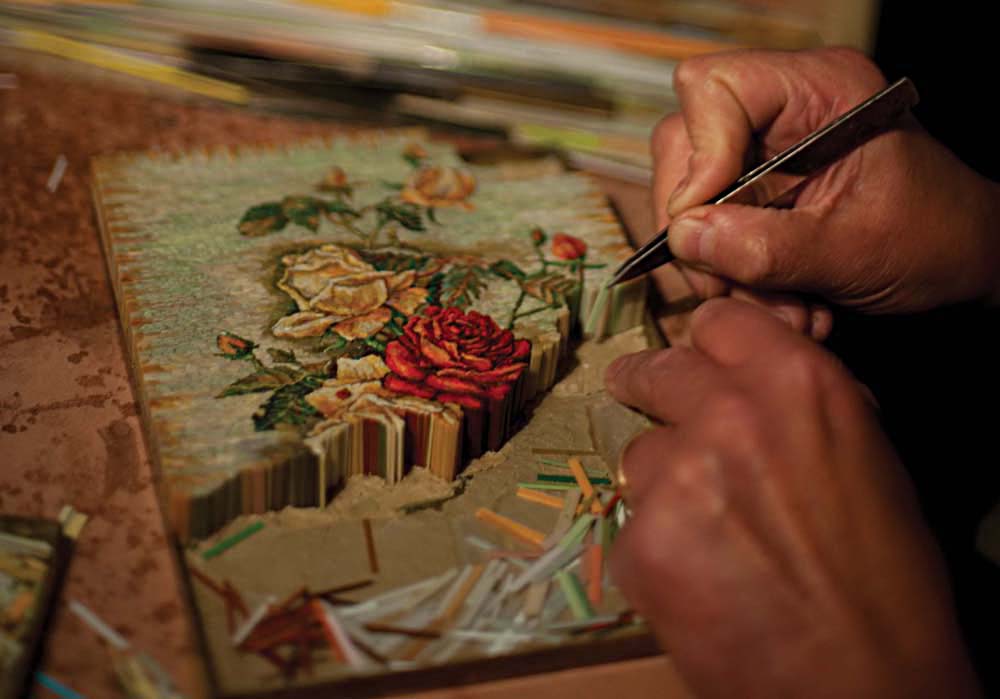 The feature that makes this workshop, which has been creating artistic mosaics since the 1800s, unique is use of three different mosaic techniques: the Florentine mosaic in hard stone; the micro-mosaic made from spun glass; and the classic cut mosaic made from pieces of glass. Mosaic masters specialised in these techniques make jewellery and ornaments, […] 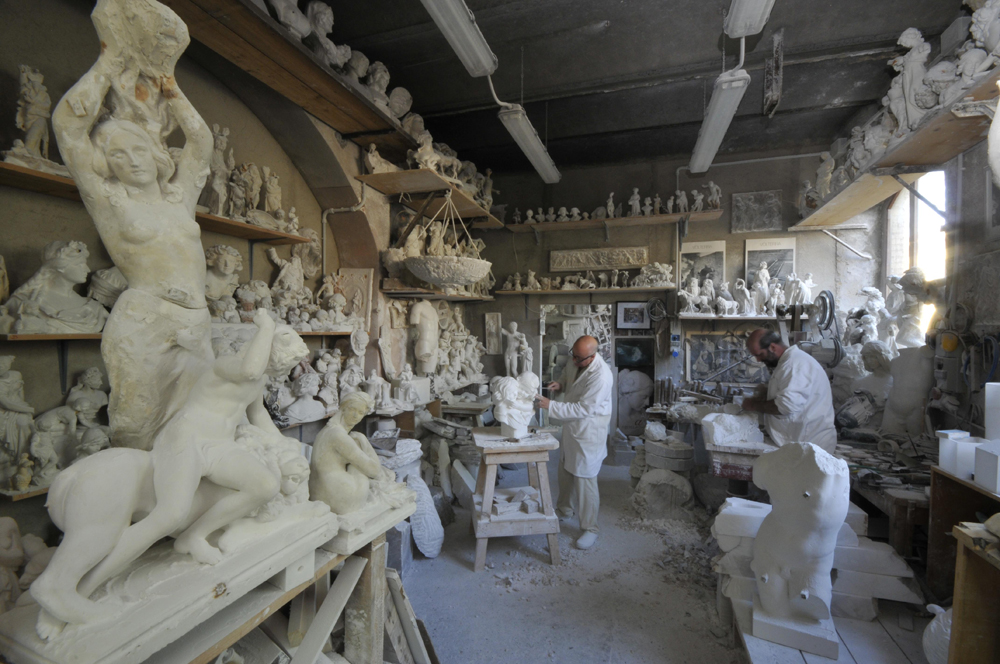 Alab’Arte is a sculpture workshop specialized in the alabaster of Volterra. The workshop of Roberto Chiti and Giorgio Finazzo is located in the historic centre and open to the public. There they make sculptures and objects for lighting and furnishing. They often work with other contemporary artists and as well as on important restoration projects, […] 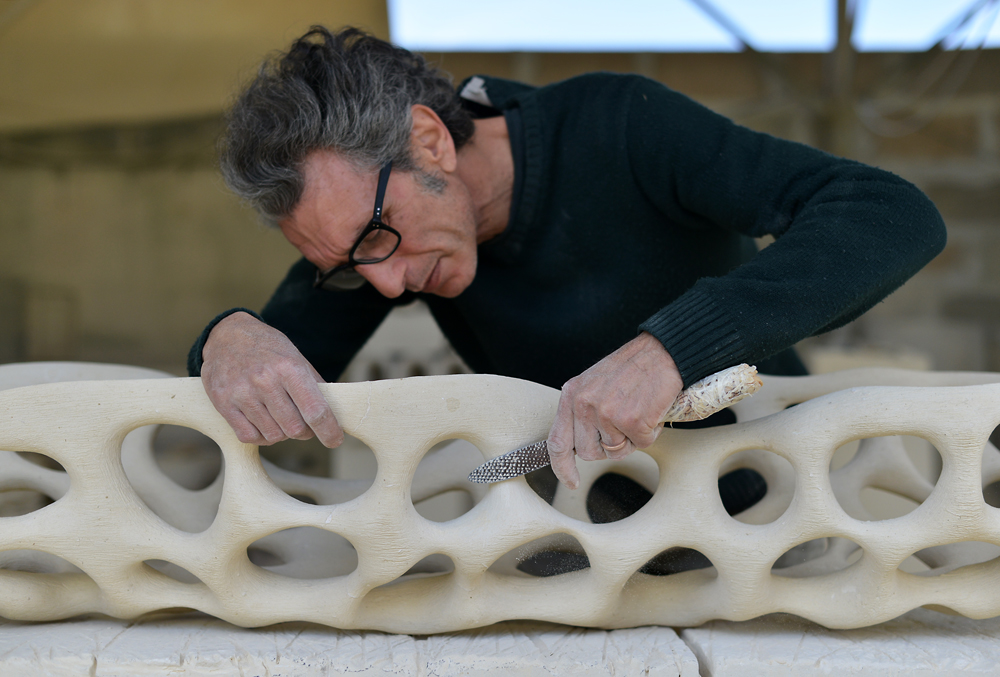 Thanks to extensive research and experimentation on stone from Lecce, Renzo Buttazzo managed to transform this material, with innovation and artisan’s knowledge, making it one-of-a-kind and creating a unique style, now recognized worldwide. In his design and sculpture works, one can perceive the unique execution and special quality of the stone, beyond that sense of […] 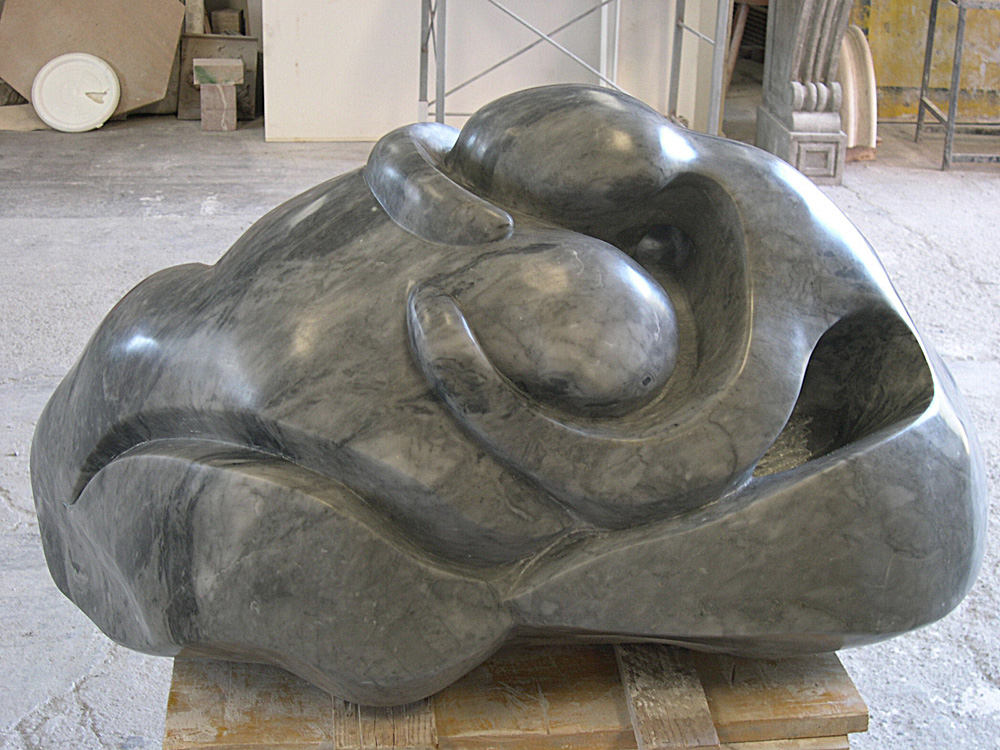 The Todini sculpture firm is the result of the passion of two brothers for art and sculpture. Operating initially in the field of interior and exterior design and architecture, they then turned to sculpture in all fields, replicas of classical sculptures and original contemporary sculptures. Working in marble, stone, ceramic and resin, they produce unique […]