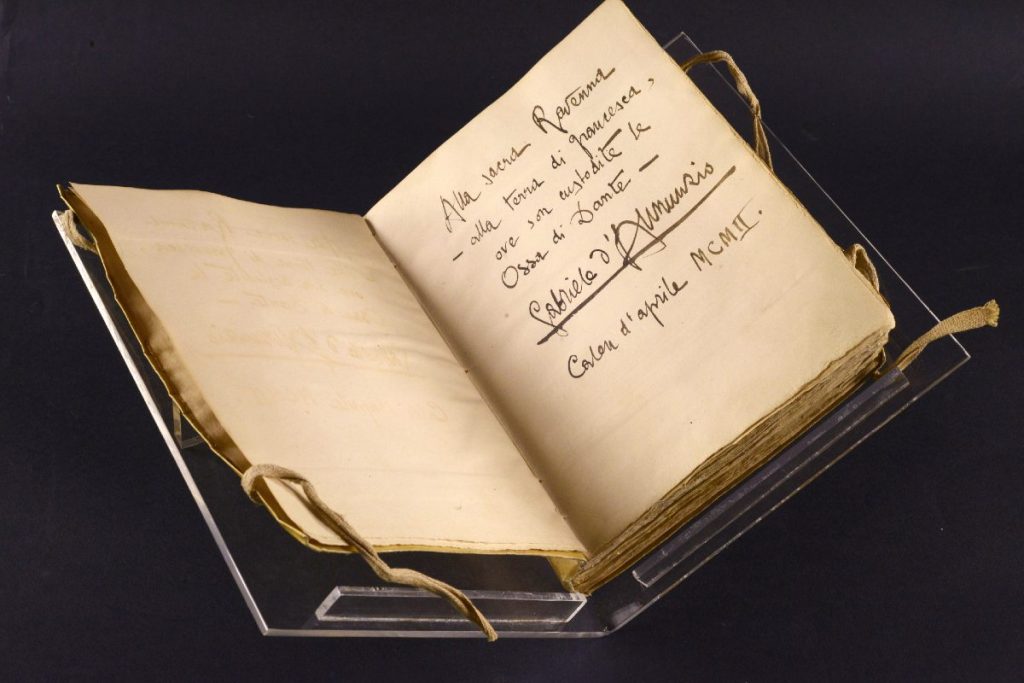 A century has passed since the rustic villa on the right bank of Lake Garda was transformed into the Vittoriale by Gabriele d'Annunzio in 1921. Among the various celebrations scheduled, the Dante and Gabriele d'Annunzio exhibition presents objects and works illustrating the bond between the two poets. Among the many testimonies are the three large jute sacks filled with laurel leaves, a symbol of glory and immortality, which the Vate sent to Ravenna for the sixth centenary of Dante's death (1921), solemnly transported by three planes piloted by airmen from the Carnaro Air Force, the protagonist of the Istrian events of the First World War. The sacks, since then kept in Ravenna and recently exhibited at the Classense Library in Ravenna on the occasion of the exhibition Inclusa est flamma, were decorated by the painter and engraver Adolfo De Carolis with the stars of the constellation Ursa Major, with garlands and with the motto, devised by d'Annunzio, celebrating Dante with a symbolic and perennial fire that burns in honour of the Supreme Poet, like the flame of the Ravenna funeral monument, raised to the "Altar of the Fatherland". Fondazione Il Vittoriale degli Italiani, Museo d'Annunzio Segreto, Gardone Riviera +39 0365 296511 - info@vittoriale.it, until 31 December 2021