Murano and its magnificent glassware

The first document that attests the presence of glassworks in Venice, where the name of a glass-blower active in the city appears, dates to 982 AD. In 1295, the Serenissima ordered that all glass kilns transfer from Venice to the isle of Murano because of the grave risk of fire that derived from the manufacturing of glass.

The glass produced on Murano soon became a much sought after product of the Serenissima, which was committed to protecting and defending it in every way. So much so that the maestro glass-blowers were also obliged to reside on the island and could not leave Venice without a special permit. The formulas were written in secret books and handed down jealously from father to son, a tradition that is still vital today. Being a maestro glass-blower was a privilege. Just consider that among the common people, only glass-blowers could marry the daughters of nobles.

During the Baroque period, extravagance prevailed (as in all the arts) and led to the search for new models and stylistic effects in the glass. In the 1800s, the glassworks of Murano developed the techniques that are the foundations of modern glassware.

The art of making glass is one of the most antique and complex. The great masters are extraordinary artists who model and shape the material in incomparable forms and colours. The forms seem to spring from a work of magic: the fire, a puff, pliers and a few movements of capable hands, the fruit of so many years of work and technical prowess. All to breathe life into such beautiful objects that capture the heart anew each time. 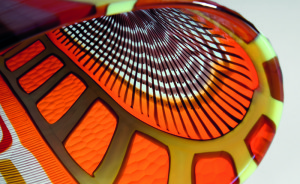 Another typical joy of Venice is linked to Carnival, which is played out every year in the magnificent scenario of the piazzas and squares, the narrow lanes and the canals. For this holiday, which attracts visitors from around the world, there are some superb workshops that create sumptuously elegant costumes and masks, continuing a unique tradition. Venice also has many hidden treasures of the goldsmiths’ and weavers’ arts, long present in the history of the city on the lagoon.