Reality has often surpassed the wildest dreams of writers, philosophers, poets and scriptwriters. What was once difficult to imagine even for the most extravagant science-fiction writers- robots, 3D printers reproducing themselves, artificial organs or, more simply, highly advanced cell phones serving as computing devices- is so much part of our life now that we can hardly imagine the world without it. Such amazing technological progress, so fast and all-reaching, brought advances in many fields and improved our everyday life in many ways. And yet, this “progress” is causing us, at times, to lose that priceless human factor which no machine can replicate. 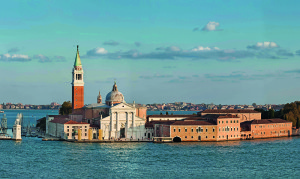 Examples par excellence of such a truth are art and craftsmanship, the fields in which human factor and genius are visible in the both the design and construction phase. It is creativity expressed at its fullest. This is the theme of Homo Faber: Crafting a more human future, the first major cultural event devoted to European craftsmanship, held from September 14 to 30 in the magnificent spaces of the Giorgio Cini Foundation on the island of San Giorgio Maggiore, one of the Venetian Lagoon’s most evocative places. Presented by the Michelangelo Foundation for Creativity and Craftsmanship with the collaboration of Fondation Bettencourt Schueller, Triennale Design Museum and Fondazione Cologni dei Mestieri d’Arte, this spectacular and unprecedented celebration of high craftsmanship will give visitors the opportunity to observe first-hand the skills of Europe’s greatest master artisans and their creations. The exhibition spreads over the Foundation’s libraries, cloisters and galleries: 4,000 square meters of pure creativity, from jewelry to bespoke bicycles. It brings together the oldest and newest techniques, in which the human factor is never left out. The project was created by a team of world-class designers and architects, such as Michele De Lucchi, India Mahdavi and Stefano Boeri.

“Homo Faber is an expression that was first coined during the Renaissance and it captures and celebrates the infinite creativity of human beings- Johann Rupert, Co-founder of the Michelangelo Foundation, says. “The exhibit will provide an overview of fine European craftsmanship but it will, nevertheless, have a singular undercurrent: what human beings can do better than machines.”

The exhibition is scheduled to overlap with Venice’s acclaimed Biennale of Architecture but  “we chose Venice for this exhibition not only because it is a bastion of culture and a place of unequalled beauty, -Franco Cologni, Co-founder of the Michelangelo Foundation explains- but also because Venice is today and has always been a European hub for exchange and connection.”

One of the most eagerly awaited events is the Creativity and Craftsmanship exhibition, held at the Cenacolo Palladiano, Palladio’s magnificent hall, which will play host to a series of specially-commissioned works created by pairing designers with artisans, selected by Michele De Lucchi, each one an interpretation of traditional skills through contemporary forms. But this is only a small part of a major event designed to promote and preserve a precious and priceless heritage which, as the exhibition’s title suggests, will help us build a “more human future”.